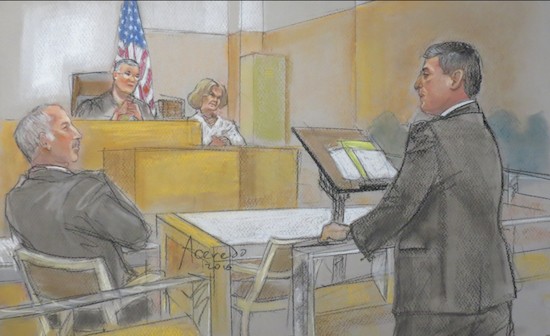 In this courtroom sketch, Hon. Loren Baily-Schiffman listens as Nicholas Tzaneteas (at right), trial counsel to the law firm Weser and Weser, conducts a direct examination of the plaintiff in the pedestrian-motor vehicle accident trial Chou v. Ocean Ambulette Service Inc., et al.In May 2012, Magdalena Chou was a 61-year-old pedestrian entering the crosswalk at Ocean Avenue with the light in her favor. She had almost made it across the intersection when she was struck by an ambulette making a left turn from Jerome Avenue. Chou was knocked down by the impact and hit her head on the pavement. At issue in the trial was the determination of damages after summary judgment on liability was originally denied but reversed on appeal. Chou complained of head pain and was transported from the accident scene, wearing a neck collar, to the hospital, where she made further complaints. Chou testified to presently suffering from limitations due to cognitive difficulties and pain, and she continues to undergo physical therapy and take medication as needed. Tzaneteas maintained that his client’s subsequent laparoscopic left shoulder surgery, as well as discectomy and cervical spine fusion surgery within a year and a half, were directly related to the accident.Salvatore DeSantis (at left), of the law firm Molod Spitz & DeSantis, represented defendants Ocean Ambulette and the driver and title owners. DeSantis alleged that the soft impact from the ambulette collision moving at 3 mph resulted in little more than a bump on the head, which he maintained had resolved, and that any remaining difficulties were degenerative in nature and not causally related to the accident.

The jury returned a verdict for the plaintiff and arrived at a damages award midway between the parties’ predetermined high-low agreement in the trial that concluded last week in Kings County Civil Term.